Over the past couple of weeks, you may have noticed the coaches using their phones to video an individual’s movement (clean, snatch, pull up, muscle up, etc…) and then providing feedback. Providing feedback in this matter is an excellent way to show and correct some movement faults. Sometimes, people are just unaware of what we are asking of them or have no idea what we are talking about! Sometimes you may think you are making a correction, but not sure if it’s what we are asking you of. But that’s ok, that’s why we enjoy using this method of coaching every now and then. Why this is a good method is because sometimes when we give people instruction, we might be thinking it makes sense to us in our own head, but sometimes a beginner or even our more advanced members aren’t completely on the same page as us. As an example, we might talk about the butt rising to fast in the beginning of the clean or snatch. We might ask you to just keep your butt down longer, or to focus on keeping the angle of the torso the same. You might think that your butt is staying down on the next one, but still wondering why we are asking you to do to the same thing…frustrating! I know! By taking a video, then giving you the visual feedback as well as associating a cue with it, helps solidify the technique in your brains!

What we have also done is used the app Coach’s Eye to record a video of some sort of movement, and provide audio feedback and it allows us to draw on it! These we can send to you later in the day, a couples days later, or later on in the week. Learning from watching your own videos as well as listening to the audio feedback from us is another great way to use visual feedback!

As a warning though, although visual feedback is a great learning tool, it’s important to remember to become dependent on it and just rely on one single form of feedback. For example, it’s important to understand how a cue feels once you’ve performed it correctly and how different the movement feels from before you received the cue.

Next time your in and would like some technique work, feel free to ask one of us to video you and provide you with some feedback! 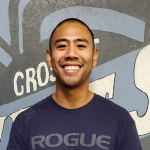 Coach at CrossFit Sweat Shop since 2014