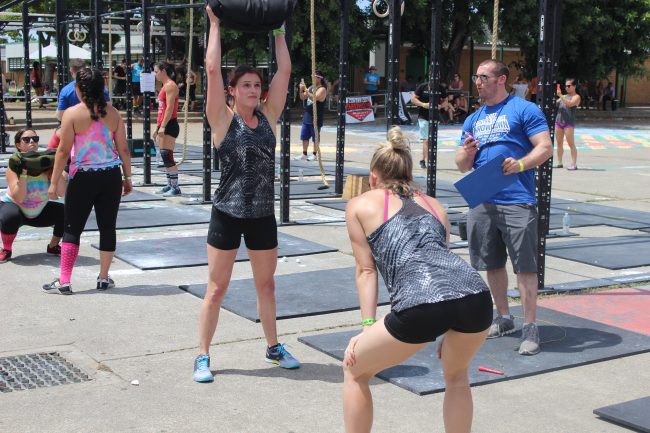 Last weekend we had FIVE Sweat Shop squads compete at the Contra Costa Throwdown in Concord. This was my first year participating in the local throwdown and had a blast competing alongside familiar competitors like Marko, DJ, and Gomer, as well as seeing first time competitors Danielle, Cally, Chris, Britney, Cole, and Braydan absolutely kill it! All teams did amazing and had some huge PR’s. It was fun to be around such a positive group and it felt like, as Nabil alluded to during his competition, the old-school type competitions. I look forward to doing more like these! Here were some highlights from each team. Check out some awesome photos taken by Nadia and Nikki! Thanks for coming out everyone!

Gomer and Brit
These ladies crushed it all day and were just ONE spot short of making the finals. Brit and Carolyn were a perfect match of skill and grittiness. Gomer smashed on the skills like bar muscle ups and toes to bars while Brit sprinted through the light dumbbell and kettlebell work. Their best finish of the day  was on the RIG workout (7th) and Gomer had the second best snatch of the day in the Rx’d division at 155! They competed like a finely tuned machine, even having the game plan for each workout written on their arms. Ballers! I hope you both compete together again!

Marko and Chris
I had a blast watching these guys. I’ve competed alongside Marko and know how gritty he is and how he literally SELLS OUT his body for his teammate. Last weekend was no different. This was Chris’s first CF competition and it did NOT show. On the first event of the day, Chris hit a massive PR on the clean and jerk ladder! He struggled out of the 275 clean but nailed the jerk with ease which was 6th best of the day…something you don’t typically see in a first competition! Chris and Marko stayed consistent and finished inside the top 6 on every workout and in my opinion, most impressively during the heavy and challenging DB OHS workout. I got out of my seat when I saw Marko smash a huge set unbroken, Chris coming in and smashing 31 unbroken, and while he saw that he was going unbroken, Marko went full sell out on the bike for points! Super impressive guys!

Cole and DJ
This was Cole’s first competition and he couldn’t have partnered up with anyone better than DJ! Their mix of strength and skills was a stellar combo and it showed on all of the workouts. DJ had the second-best snatch of the day 255# and Cole went hugely beast mode on the rig workout tearing through bar muscle ups, pistols, and burpee C2B. DJ and Cole didn’t even get a chance to practice these workouts and still showed up like a pick-up game and balled out especially on the DB OHS workout. DJ’s technique was on point and Cole moved through them with ease. Cole is just simply JACKED!

Cally and Danielle
In their first competition, these ladies made the finals! Danielle and Cally practiced the Rig workout a couple times before the weekend and it showed. They were, by far, the most cohesive and went into each movement with conviction knowing that they had the perfect plan to split it up. Cally handled the squats and knees to chest, while Danielle murdered the KB work. Out of all the divisions, the scaled women’s was the biggest so they passed a ton of teams making it to the finals. The finals had rope climbs, double unders, sandbag thrusters and tosses and they worked together perfectly. Right when one of them was done, the other would be right there to pick up the work. They took second in the finals and 4th overall! Big congrats, ladies!

Braydan and JB
The highlight of my day was just getting to team up and smash it with Braydan. Beyond the amazing performances he put on, like a 225 clean and jerk (better than many of the guys 10+ years older than him) it was amazing seeing how easy teamwork and communication came to him during competition. While he is an awesome team player, this 16 year-old is a phenomenal athlete and can hold his own against older, experienced folks! Our best finish was 2nd on the Rig workout which was almost ALL Braydan. While I got to do the fun stuff like bar muscle ups, pistols, and KB snatches, Braydan took the load on the grit work like KB Swings, goblet squats, burpees, and toes to bar. We ran through the workout super smooth and Braydan was there when I needed him.  I truly hope that we can do another comp together soon…. if his mom lets me! 😉