Outside The Box Feats 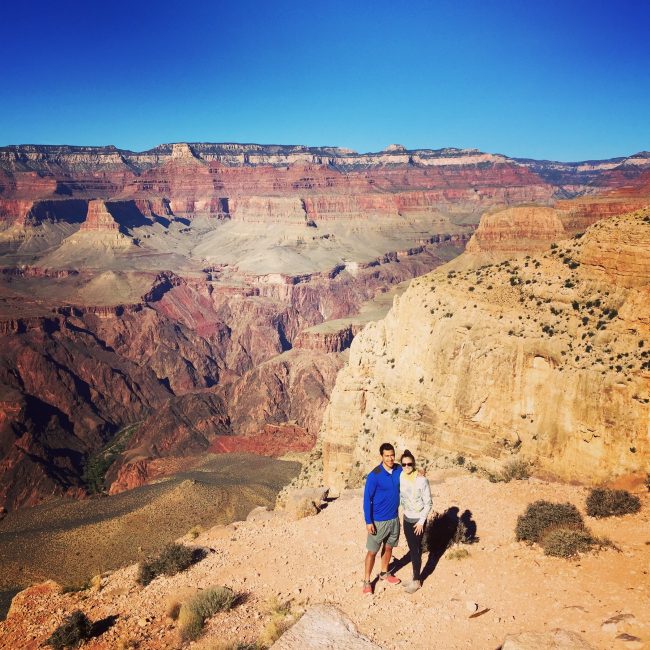 When is the last time you tested your fitness outside the Shop? We are always encouraging our members to get outside our “newly painted” walls from time to time and use the awesome strength and conditioning you’ve gained from your weekly CrossFit training. One recent thing that surprised me was when Melaney and I traveled to the Grand Canyon. We got into Phoenix super late and with barely any sleep, we woke at 4am and drove 3.5 hours straight to the Canyon. We knew our trip was super short and wanted to get in and see the awesomeness, so we got there and decided to go right into one of the gnarly hikes that is the South Kaibab Trail. The South Kaibab trail has several turn around spots but Melaney and I just kept going all the way until Skeleton point around 3000 foot of elevation change where you can see 360 view of the canyon and the Colorado river. We are no avid hikers by any means but we were impressed with how we did. As we were trekking down the pretty steep trail looking at the awesome views of the canyon, I couldn’t help but realize how easy it was for both of us and how many folks were struggling, especially our age or a little younger. I think about how, although we probably could have completed the trail back before we did CrossFit, it would not have been half as enjoyable because we would need to take tons of breaks and legs would be gone. We were actually able to enjoy the views while going down and most surprisingly, crushing our way back up. Several warning signs said to at least account for double the time going up and I think we actually almost beat the time it took going down, even with breaks taking it all in.  Anyways, it was super fun and we were pumped at finishing it, even though when we were at the bottom we were quite skeptical of how long it would take! The most noticeable difference in fitness was how quickly we recovered when we took those short little breaks to catch the views. Within a couple seconds we’d be ready to go. Thanks, CrossFit!

Share some of your recent out of the box feats you’re proud of in the comments section!