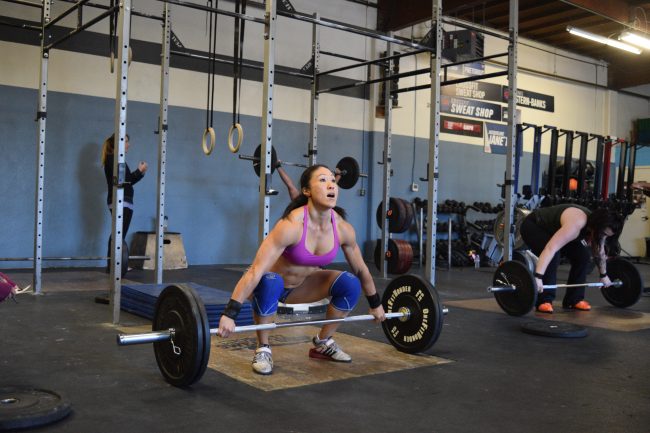 Ever since I prepped for my first olympic weightlifting meet last November, I’ve fine- tuned a lot missing parts in my lifts and have got more comfortable knowing how certain parts of the lift should feel. I’ve made big improvements in my numbers over the last year, thanks in big part to the help from of our buddies over at SPS gym in Oakland. I’d been snatching and cleaning…sometimes jerking 🙂 since 2012 and did most of the learning on my own. It wasn’t until I worked with the guys over there, and a useful seminar from Cara Heads-Slaughter last year, where I had a lightbulb moment in both lifts. A recurring cue I kept hearing was, “Use Your Legs”! While olympic lifting clearly requires a strong lower body, I really just thought that cue was more “motivational” to just be more aggressive. I really didn’t understand what it meant to actually use the legs! Long story short, I’d been stuck at the same weight on the snatch for about 3 years, and after that seminar and with some extra squatting, it jumped to 20lbs in about 3 months of work. I think a huge part was actually making the connection to using my legs during the drive part of the lift in addition to my hips. It’s hard for me to conceptualize what this means in a blog post, but hey, that’s why I follow Greg Everett from Catalyst Athletics! He seems to always have the lifting posts I want to get across to our members. Check this article out! The legs revelation I had may also help you!

I’ve said it a million times, and I’m going to keep saying it because not doing it is a common problem—use your legs. I’ve joked more times than is funny that we need to just get a recording saying Push harder with your legs to play repeatedly over the speakers in the gym so I don’t have to say it anymore.

The hips get all the attention in the sports world, including weightlifting. Don’t get me wrong—hips are extremely important and in no way am I suggesting otherwise by writing this article—but the obsessive focus on the hips too often obscures the importance of the legs, and leaves them out of the discussion to the point that too many people are unsure of what they’re for other than holding tattoos.